This forest is young, sparse, with slender trees rising, stretching, lifting their branches tentatively. Sunlight drifts and filters through the trees’ canopy. An old set of railroad tracks runs arrow-straight through this open woodland. Grass, weeds, and leaf litter finger the wooden ties and time-polished tracks, and I walk down their center, several strides behind my friend. He is an imposing figure — tall, broad of shoulder, muscled, and clothed entirely in black.  Pants, shirt, sunglasses — everything about him refuses sunlight. With each pace, he increases the distance between us. It’s unlikely I’ll catch up, but I feel no sense of urgency, no need to hurry.

Eventually, the tracks emerge from the woodland. The ground here is irregular and falls away, carved out by a sinuous river that switches back and forth beneath the railroad tracks. Supporting the tracks is an elaborate structure of intersecting posts and beams and struts sunk into the river’s banks and bed. I glance down between my feet, between the thick wooden ties, watch the blue water twisting below, churning with vigor as it rushes on its course. When I look up again, I see that my friend has stepped onto a pale dirt road that runs perpendicular to the the railroad tracks. Resuming my pace, I arrive at that same point, where tracks meet road — another man waits here; he looks exactly like my friend, down to the choice of clothing. This man tells me that my friend mistakenly believes the pale road will allow him to circumvent the river and that he will be able to pick up the rail road tracks once again on the other side, but that in truth, the road eventually heads off into the mountains and circles back in the direction from which we had originally departed. I strain to see my friend, but he is now a remote and distant figure. I shout, but he’s too far away to hear me. I wave my arms, but he never glances back.

Then, to my surprise, a third man appears in the middle of the road about 50 feet away. Although his back is to me, I know that he, too, looks precisely like my friend. This third man begins walking away down the pale road’s center, but his movements are odd, mechanical. As I watch, he reaches his right hand up and back behind his neck where he grasps something firmly between his thumb and forefinger. With a slight tug, he unzips the whole of himself, from skull to spine’s base. The silver zipper teeth flash. His exterior self — clothes, skin, sunglasses — float to the dusty road as a single unit, and he steps out of and over them. Without breaking stride, he continues walking in a brand new, yet seemingly identical, version of himself, the man beside me, and my friend. 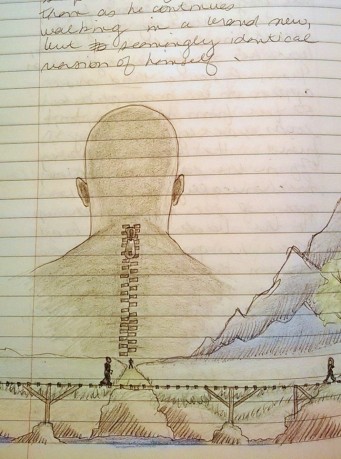 4 thoughts on “Unzipped — A dream”