Back in June, when lush, green Spring had begun to unfold into Summer, I shared a post about the Catbirds that have been visiting our home each season for the past eight years. It was with some hesitation that I did so; I don’t like to consider myself a superstitious individual, but there is some small part of me that fears opening the door a little too widely, acknowledging a treasured something a little too loudly, may cause that very thing to vanish. As if the Universe will deem me unworthy.

Quite the opposite has occurred. Not long after publishing the post “Days of Song and Raisins”, the inspiration for that essay alit upon the railing’s post outside our door. There he was, peering at me through the kitchen window — O.C., Original Catbird! Recognition bloomed slowly as I looked at that small figure after too long an absence. The leap of heart, the catch of breath, my feet quick to carry me to the side door. When I arrived, he turned and paused on the post, flicking his tail, cocking his head toward me with a backward glance. As if to allow me that moment’s visual confirmation; the chance to see that distinguishing trait — the thin line of pale gray feathers near his right eye. Again, the small leap of heart. Once I had stepped outside, he accepted one raisin, then a second before skimming away. He “chatted” as he left.

Since that afternoon in mid-June, O.C.’s visits have continued, as if he had not been missing from our lives for two years. He comes regularly now, often with Calvin. Whereas Calvin retains the smooth gray body of a younger bird, O.C.’s is now patched with paler spots and his charcoal cap seems to have receded. (I have seen, from six years of raising chickens that birds, too, can go gray with age, and I suspect this may be so with O.C.) The two mature Catbirds seem to work cooperatively to feed their young, of which there are several. If I happen to be distracted with some other household task — washing dishes, cleaning the kitchen — O.C., Calvin or, on occasion, a fledgling, will fly directly at the kitchen window and cling to the screen, or maneuver just so to land upon the storm door’s curled handle. They call. They posture. They know where I am.

It is feeding season, and I am on call during all daylight hours. The container of raisins sits on the kitchen counter within easy reach, although there are times when it is more efficient to stand on the side steps and toss raisins one after the other without pause. O.C. collects the wrinkled fruit one at a time, organizes and then packs them ergonomically into his beak before darting off. Lately, Calvin might arrive with sooty fledglings in tow, and will stuff the gathered raisins directly into their pale, open, begging mouths.

Perhaps it goes without saying that each member of my family is involved in these transactions. We take turns feeding and admiring and reporting back to one another. Where life had placed O.C. during his absence may remain a mystery to us, but we are immensely pleased he has returned and is well. He adds a certain dignity with his presence and takes his elder status seriously — accepting Cardinal’s company; warning of and chasing off Blue Jays.

For roughly five months of each year, these curious, charming, active creatures scurry about our yard’s leaf litter and underbrush. They weave their burbling commentary, nasal mewing, and liquid song over each day. They raise and feed their awkward, fluttering young on our doorstep. All in exchange for a safe environment and raisins aplenty. From our point of view, it’s a wonderful arrangement. 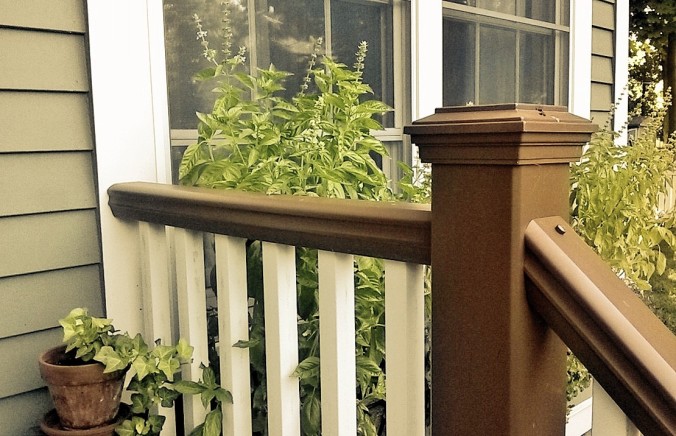 4 thoughts on “Avian Arrangement — A Truth”