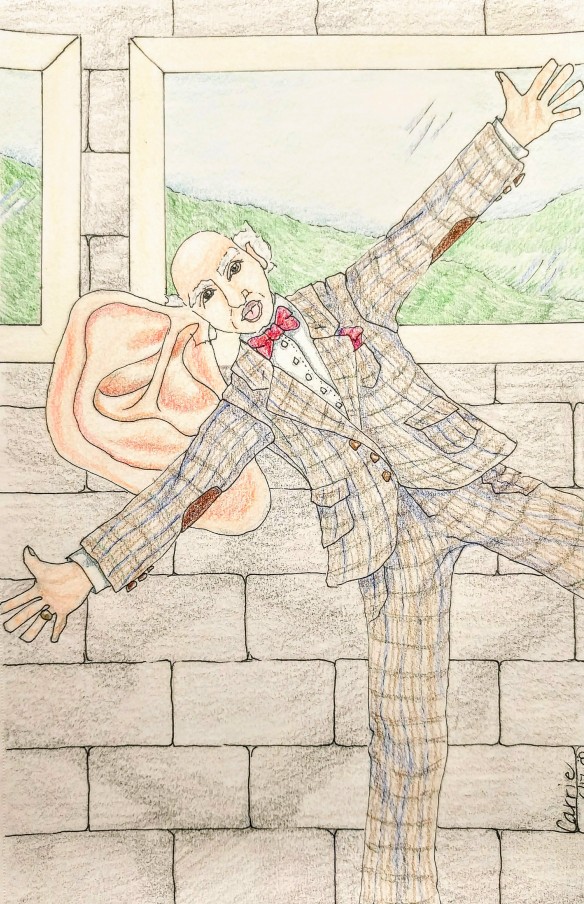 …And then, that distinguished gentleman, with his unruly fringe of white floss hair, in his pert bow tie and professorial brown tweeds, gave an inarticulate shout. He began to list over against his will, despite his best efforts to remain upright and erect, pulled by the increased weight and drag of his rapidly growing right ear. The organ expanded –from the size of a tea saucer, to that of a luncheon plate, a dinner plate, until, at last, it exceeded the size of a tea service tray. The elderly gentleman flailed his arms in wide, wild gestures, drawn earthward in a fashion that demanded he balance on one leg. “The mice! The mice!” he cried out. And from the auditorium’s wings dashed several young men in dark blue suits brandishing tweezers and chopsticks. In a wave, they surged toward the professor’s side and maneuvered about his enormous right ear in complex choreography – some moved to the rear and grasped him about the hips and shoulders to prevent the aged man from falling; others leapt to his left side and applied themselves to his raised left arm as ballast; while those remaining drew their particular tools and, with obvious care and practice, inserted them into the enlarged ear’s broad canal and withdrew, again and again, compact wads of soft gray matter. The young men flung aside the accumulated mouse-like wads with flicks of their supple wrists.

And all who witnessed gaped, astonished and astounded and – while endeavoring to preserve the tweed-suited gentleman’s threadbare dignity – visibly appalled.