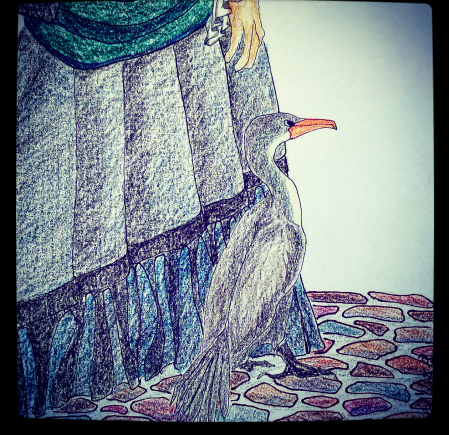 There, across the street, one corner building curves back sharply on itself in a flatiron shape. Narrow alleys slide past, follow its long sides out of sight. Here, the streets are thick with a clamor of people – they spill out onto the cobblestones, eddy back and forth in incessant motion. All except one woman, who holds and defines her own space within the human river. Stationed before the flatiron building, she is dressed in a formal riding habit of tailored black velvet jacket and long skirt; a high-collared white shirt with lace at neck and sleeves; a veiled, men’s style top hat; and low-heeled hook-and-button boots.

While the sea of people swells around her, she cries out suddenly, calls attention to the “Little Green Heron” she has found! Such a surprise! Such an unanticipated and marvelous happenstance! Indeed, a medium-sized semi-aquatic bird waddles near her —  it pulls occasionally at her skirts with its long, narrow, hook-ended beak. Most ignore the woman’s exclamations. But the crowd constantly reinvents itself with new folk, and gives her renewed opportunity to draw any attention she can to the “Little Green Heron”.

But it is not a Little Green Heron at all; it is clearly a double-crested cormorant. In addition, there is no reason she should be at all surprised at its proximity, for each time she crosses from one curb of the narrow corner to another, she reaches inside her riding habit and pulls out a small fringed, burgundy purse that is filled with fish. With a gloved hand, she rations morsels to the sleek-feathered black bird that shuffles its webbed feet over the cobbles and struggles to keep up.

2 thoughts on “Landlocked Lies — A Dream”