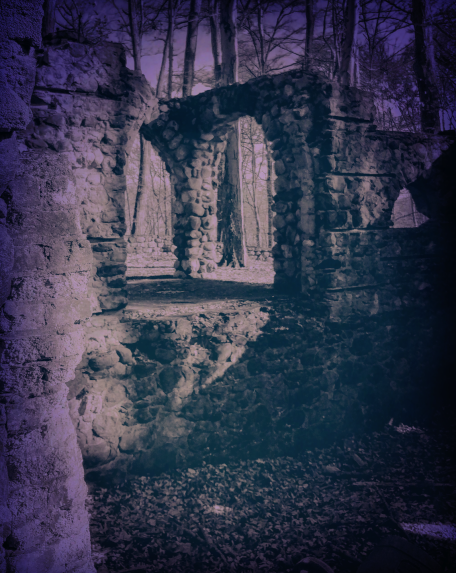 The full moon shines over a shattered landscape, illuminates the chunks and rubble of former structures – houses, shops, garages. A perilous terrain of tumbled stone and cement foundations; of splintered beams and twists of toothy, rusted metal; of vertical portions of walls. The moon’s light is kind, pitying; paints all in soft, silver monochrome.

Crouched. A solitary human cast amidst a forgotten collection of debris; on a ledge of broken flooring, near a remarkably intact window. The ledge juts from a roofless, two-story wall that has forgotten to fall. Keep as far from the splintered edge as possible, to avoid slipping, toppling over, out and downward – to avoid the lion that lies in wait below. It moves back and forth through random waste, like an alligator. Occasionally, the lion bunches up its hind legs and leaps, launches itself up through the dark, spreads its talons and scrabbles for purchase along the floor’s crumbling ledge. It need not gain a solid foothold; with each leap and gouge, the lion removes a piece of flooring before it falls back to earth. Soon enough, the ledge will be narrowed, eroded.

Discourage the lion’s efforts. Fling random objects through the dark — a length of pipe; a split two-by-four; a chunk of plaster; a beautifully made antique wood plane. Track each object’s trajectory, hear each clatter amongst the debris below. Hear the lion’s low huff and growl, the heavy pad of its footfalls as it paces, paces, paces. Hear the lazy switch and sweep of its tail as it prepares to leap again.